My portable workhorse computer is a Powerbook G3 Firewire “Pismo” hailing from the year 2000 in all its 500mhz glory. Go on and laugh, but it still works. It’s been desk-bound for a year or more, though, since its battery won’t hold a charge. Let’s see if it’s fixable on the cheap, since I’m nothing if not frugal with my computers. First off, the standard warning about safety when working with lithium cells. Handle with care, don’t short them out, have common sense, but don’t be afraid. 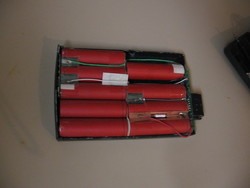 The Pismo battery consists of nine 18650 lithium cells. My OEM pack is no longer with me, so for this project I’m re-celling a Newer Technology pack I purchased a few years back. The hardest part of this project (and probably also its downfall) was the difficulty I had opening the pack. These things aren’t really designed to be user-serviceable. The pack is wired as three series sets of three parallel cells each. At 3.6 volts per cell, the entire pack outputs 10.8 volts. I tested the old cells out of curiosity, and they all read around 0.6 volts. 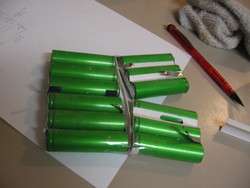 New cells are available online, of course, but that’s not the frugal option! I rescued mine at the last minute from a trashed Hewlett Packard laptop, twelve cells in near-perfect condition showing great voltages. Its battery was wired similarly, so I was able to use two sets of cells as-is, clipping the last apart to re-arrange the cells to fit the smaller Pismo pack. 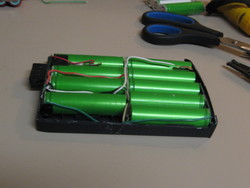 Luckily, my replacement cells had solder tabs attached. I’d be out of luck otherwise, since I don’t own a spot welder. Replacement was as simple as de-soldering the old dead cells and soldering in the replacements in the same configuration. 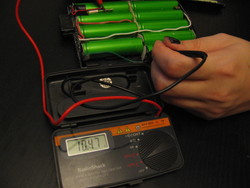 Although the re-celled pack measures to the correct output voltage, I wasn’t able to fit it inside the laptop. Tape made it too thick, and I have no other way to secure it at the moment. I’ve placed my wires as well as I thought possible, but the pack is still too thick in the middle. So now this post is mostly about “this is possible” instead of “this worked for me”. 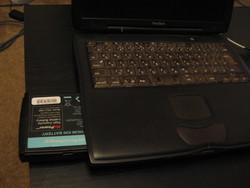