Care and maintenance of the CECHA Playstation 3

I enjoy my Playstation 3 the most out of the three mainstream consoles this generation. They don’t seem built to last, though, as I read more and more posts about older models succumbing to the “Yellow Light of Death”. My console is the original backwards-compatible CECHA model, more commonly but not entirely correctly referred to by the size of its stock hard disk, 60GB. Let’s take a peek inside and see if we can do this better than Sony.

The Cell Broadband Engine and Reality Synthesizer produce monstrous amounts of heat and gobble up power. It’s telling how the lights in my room always dim when the console is switched on. For this exercise I’m going to open the console, strip it down to the board, and replace the thermal compound on the CBE and RSX to let them more efficiently transfer heat to the system’s heat sink.

To SCE’s credit, the Playstation 3 is a breeze to disassemble and a joy to work with. The single security screw on the console holds the top case in place, covering all the other normal screws. On the “fat” models like my CECHA, this screw is a Torx TS10. Once it’s removed, the top plastic slides off toward the bottom of the console. That’s all. No 3mm tri-wing screws like on the Wii, and nothing akin to the Xbox 360’s awful tabs. 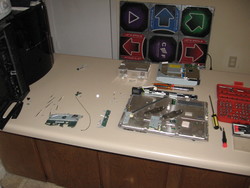 From here, disassembly is simply a matter of removing layers and catalogueing the screws. Every layer features etched arrows pointing to the screws needed to remove that layer. I usually remove components starting with the WiFi/Bluetooth board and antenna, then the power supply, the Bluray drive, the power/eject board, the bottom case, and finally the heat sink and fan. If you’ve had your console for a while you’ll probably also run into a layer and wads of dust. Clean that out. 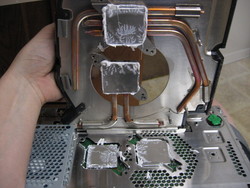 Once we’re in sight of the CBE and RSX it becomes clear that far too much thermal compound is used in manufacturing, the same problem faced by Apple with their portables a few years back. While a little is necessary to fill the microscopic gaps between the heat sink and the chips’ heat spreaders, too much will significantly impede thermal transfer. My poor console was drowning in the stuff, with large globs falling off as I held the heat sink up to take a photo. To be fair, the majority of it was squeezed out past the edges of the heat spreaders, but this is never a positive sign.

After cleaning the heat sink and heat spreaders of all that old compound, we’re ready to apply some fresh. I used Arctic Silver 5, but any enthusiast compound should do the trick. Many guides recommend applying some and then spreading it into a thin coat covering the heat spreader. I disagree, since that’s a good way to get air bubbles between the two pieces. A better method is to squeeze out a rice-grain to pea-sized blob on the RSX and on the CBE, then press the heat sink down onto the heat spreaders from behind. The downward pressure will spread the compound into a nickel (20mm or so)-sized patch. It doesn’t have to cover the entire heat spreader, because the cores of both chips sit directly in the middle. Do it once and pull the heat sink back up to check your work, but do not remove the heat sink to check the final time. Then, re-assemble the console by reversing the previous steps. 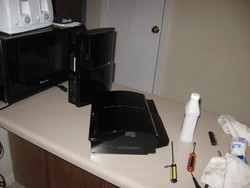 While most thermal compounds have a cure time, 200 hours in the case of Arctic Silver 5, I noticed a difference immediately after re-assembly. The fan purrs softly at boot and takes several minutes to speed up and become audible as the system builds heat. I did both my and my girlfriend’s consoles, and both were noticeably improved. Do note that if the fan gets very loud almost immediately the system is having a hard time transferring heat, and you should re-open the console and check your work. Eventual loudness is okay, of course, because this fix doesn’t stop the console from producing heat, just allows it to transfer more efficiently.