HTC’s Espresso, sold as the T-Mobile myTouch 3G Slide, is a 2010 Android handset sporting a Snapdragon S1, 512MiB of memory, and a great hardware QWERTY keyboard. I’ve since replaced it with its newer cousin, the HTC Doubleshot, but the Espresso lives on as our spare house phone. Let’s take a look at the most common hardware problem and software hurdles anyone looking to keep this device alive will encounter.

A few thousand keyboard slider cycles can take their toll on the Espresso hardware in the form of two very common problems. The slide mechanism itself tends to come apart between the two halves of the device, and the ribbon cable electrically connecting the two halves tends to wear and fray at the same point. My Espresso suffered both and has been gutted twice for repairs. Common symptoms of this problem include:

Sound like yours? Ready to attempt the fix? You’ll need: 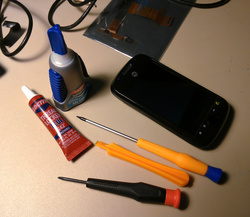 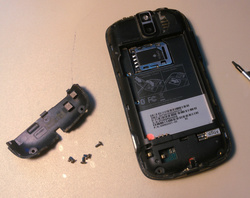 Remove the back cover, battery, and your SIM and SD card if you have one. There are four T5 screws, one in each corner of the device, and two small philips screws securing the ribbon cable to the mainboard. Removing the bottom pair of T5 screws will allow you to pop off and remove the antenna cover. 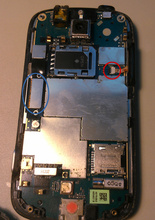 Work around the device popping the plastic tabs securing the inner back plate to its other half around the handset’s mainboard.

With the mainboard exposed, lift the tab locking the volume rocker’s cable to its socket, then slide the cable straight out and close the lock again to avoid damage. You shouldn’t have to tug. Pull the flat end of the ribbon cable straight up off its mainboard socket. There’s no lock for this one. 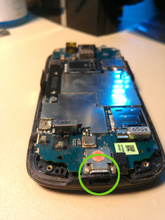 Now you can remove the main board from the device’s case. The hard part will be maneuvering the Micro-USB header out from under the curved “lip” in the case without breaking either part. It’s hard plastic but will flex enough to clear the port. Be careful not to pull the board out with too much force. It’s still attached to the case/keyboard by a wide plastic band. 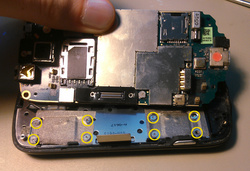 Once it’s freed, grab the still-tethered board and push it up to expose the eight screws securing the slider mechanism and screen half to the keyboard half of the device. Remove all eight. Note: These screws wiggling their way loose are the cause of loose or floppy slider action. 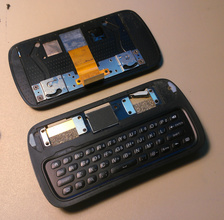 Remove the two pieces of textured tape around the eight screw holes. The two halves of the device will easily separate. Pull the ribbon cable carefully through the hole. 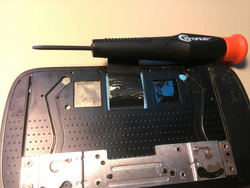 Here’s the source of our trouble! This ribbon cable is frayed from the thousands of slides I’ve inflicted on it. In my case, the display and front buttons still worked but the connection to the touch digitizer was becoming intermittent.

Continue disassembling the screen half of the device. Four screws are hidden under two pieces of textured tape. I removed the tape entirely because the edges wouldn’t lay back perfectly flat. 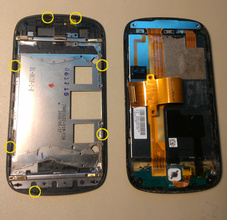 With those four screws removed you can release the plastic tabs securing the two pieces of this half of the device. They’re pictured here after I released them and separated the front and back. 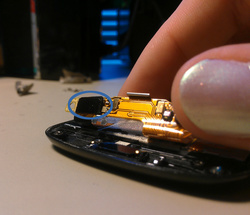 The LCD and digitizer are connected to the main slider ribbon by this connector. Remove it gently, making sure not to damage the short ribbon lead from the panel.

Remove the slider ribbon cable. If you’re here to replace a bad LCD you will need to peel the panel away from the front of the case. Heating the adhesive with a hair dryer will ease that process substantially. If not, there’s no need to continue disassembly. 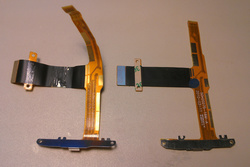 Here you can see my frayed slider ribbon next to its pristine replacement. Discard the old cable after admiring its wear and thanking it for its years of service. 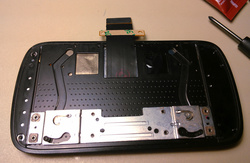 Lay the replacement ribbon in place and connect it to the panel/digitizer on the top end and the buttons/trackpad on the bottom, then feed the dangling end through its matching hole. Reattach the two pieces of this half of the device. Engage all the plastic tabs and replace the four screws on the back.

Fold the slider ribbon lead over and remove the sticker backing to stick it in place. I added a dab of super glue on each post to ensure a secure hold.

Line up the two halves of the device and feed the ribbon lead through the slit to the keyboard/mainboard side. Place a drop of thread sealant to prolong your slide mechanism’s rigidity, then replace the eight screws. 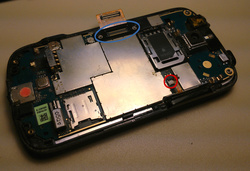 Push the mainboard back into its assembled position. Again, the hard part will be the Micro-USB port and the curved lip it fits into. Now’s also a good time to remove or replace a falsely-tripped moisture sensor (like mine!). Reconnect the slider ribbon and volume rocker lead.

Replace the back case and clip it in place, then replace the two small screws securing the slider ribbon to the mainboard and the four corner case screws. Replace your battery, SIM, and MicroSD card. 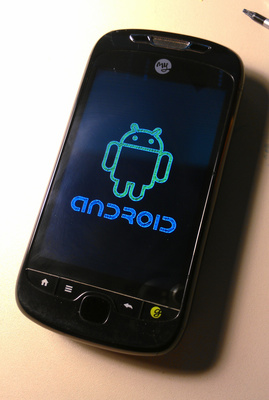 Obtain root user access on your stock firmware if you haven’t.

S-OFF is available for the Espresso via Alpharev. This unlock will leave you with ClockworkMod Recovery 2.5.0.1 and a hideous Dark Knight-themed splash1.

Once you have S-OFF, grab the full recovery image for CWMR 2.5.0.7, and flash it via fastboot or from the device itself via flash_image.

Reminder: Flashing an update.zip-formatted recovery won’t work properly on an S-OFF device, such as the recoveries flashed through ROM Manager. If you need to reflash recovery, make sure you flash the .img instead.

The device shipped with Android 2.1 running a customized “Sense” UI called Espresso. An OTA update is available to 2.2.1 along with support for Cyanogenmod 5, 6, 7, and 9 (unofficially). I prefer Cyanogenmod in almost every way to the stock firmware, but the device’s proprietary sensor drivers only work perfectly on HTC’s firmware. Installing Cyanogenmod renders WiFi and GPS nearly unusable in my experience.

Are you fond of the default Espresso Sense? Do you just want your WiFi and GPS hardware to work properly? The stock HTC firmware may be for you. The newest version available is based on Android 2.2.1 “Froyo”.

You will probably want to supplement these firmwares with Darktremor’s Apps2SD. Once flashed, you can configure apps2sd using the command-line application of the same name in a terminal emulator or an adb shell. Alternatively, install the graphical A2SDGUI.

The Espresso has official releases of Cyanogenmod 6 and 7. I prefer CM6, based on Android 2.2, with WiFi fixed by installing the official 2.2.x firmware’s proprietary WiFi drivers. CM7 has no such fix, and I find its WiFi and GPS support to be unusably broken.