I was a SEGA fangirl as a child. They may not be very glamourous a decade after the Dreamcast’s death, but the Nicole Reid of 1996 was all about some Mega Drive and Saturn.

This post tracks the modifications I’ve done to my model 1 Mega Drive to make it a better, more enjoyable console. There are plenty of similar guides online, but many of them tout less-than-stellar advice. I sifted through half-complete guides, posts on barely-readable ‘gamer’ discussion forums, and numerous datasheets to compile this how-to.

Just a note, this guide is written with the early model 1 Mega Drive in mind. If your console is missing the proud “HIGH DEFINITION GRAPHICS” declaration on the case and looks like this 1. inside, its innards are more similar to a model 2, and this guide is not applicable.

You’ll also need a project board to hold the other components. I used half of a Radio Shack 276-148. 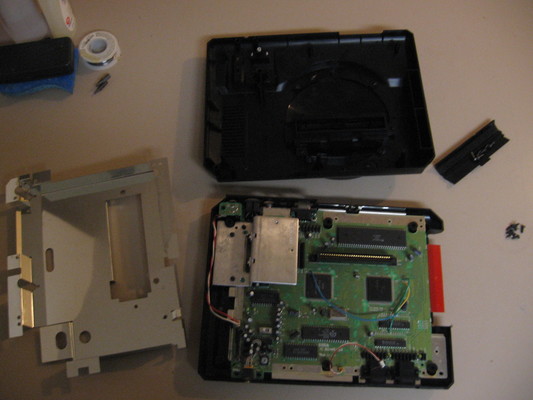 Flip the console over and remove the case screws. Flip it back and carefully — carefully! — remove the top half of the case. There’s a wire connecting the mainboard to the power LED set in the case. You can straighten the legs of the LED and work the wire out.

Next, remove the thin RF shield. I trust that anyone reading this is competent enough to do it without having to be shown the location of each screw.

There is a nice mostly-empty area of space in front of the cartridge slot. Locate your project board there.

Mark off spots for the mini-DIN, the three RCA jacks, and the two switches. I located my four connectors on the right rear of the console and the switches on the left toward the front near the existing controls. Avoid the middle of the rear of the case. If you locate anything there you’ll lose the ability to attach the Power Base Converter. 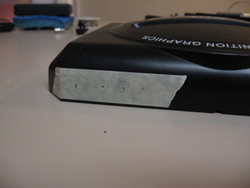 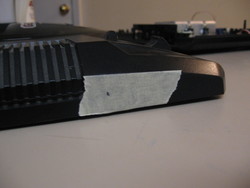 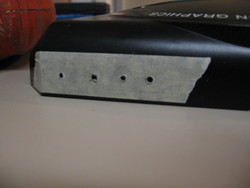 These photos were taken before I decided to install an overclock switch, so they only show one.

Here’s a diagram of what you’ll build, for those who prefer pictures to words. 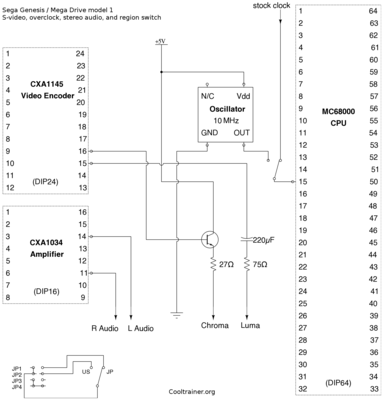 This schematic floats around online as an S-Video circuit for the CXA1145. Don’t build it. The same or better results are had with the four components in this guide.

Anyone who’s seen the RF or composite video output of a model 1 MD can vouch for its lack of quality. The experience is tainted by dark, blurry visuals and bad fringing where areas of colour meet, and a rainbow interference pattern. Don’t let it fool you! The Mega Drive is capable of emulator-quality video output using S-Video, but you have to tap the CXA1145 to get it. The A/V connector only features composite and RGB, although its RGB is wonderful if you have a compatible display. 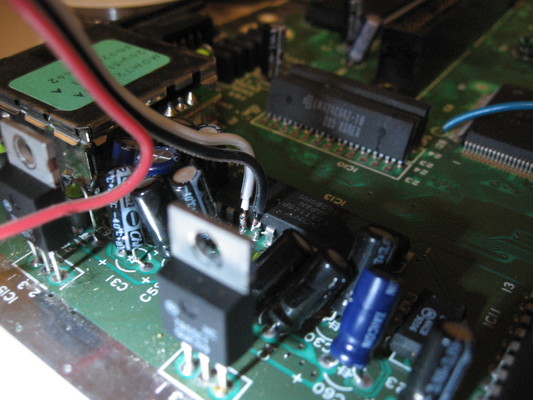 The IC we’re after, the video encoder, was protected by the small RF shield. Make sure yours is labeled CXA1145. The MB3514 found in some models is said to work as well, but I’ve never tried one. Pin 15 on this chip is chroma, and pin 16 is luma. Connect the negative side of the 220µF capacitor to pin 15, the 75Ω resistor to the positive leg of the capacitor, and the chroma pin of the mini-DIN to the resistor. Connect the base (Refer to your transistor’s datasheet for the pinout) of the transistor to pin 16, the collector of the transistor to +5V, the emitter of the transistor to the 27Ω resistor, and the luma pin of the mini-DIM to the resistor. The red wire in this photo is composite video and is not related to S-Video.

Get the existing composite signal from the A/V port, pin 1. 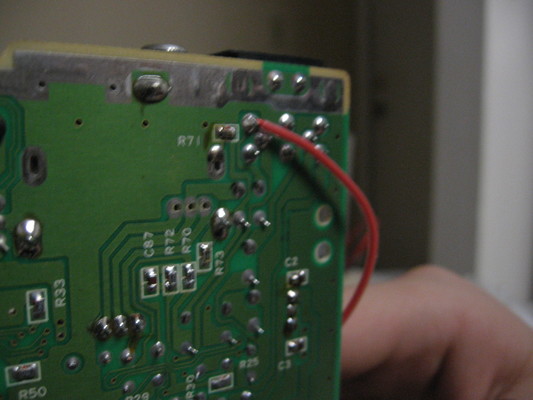 Grab these from the underside of one of the two +5v regulators (IC15 and IC17) on the side of the board near the external power connector. Double-check with a continuity tester between the external connector and your points. 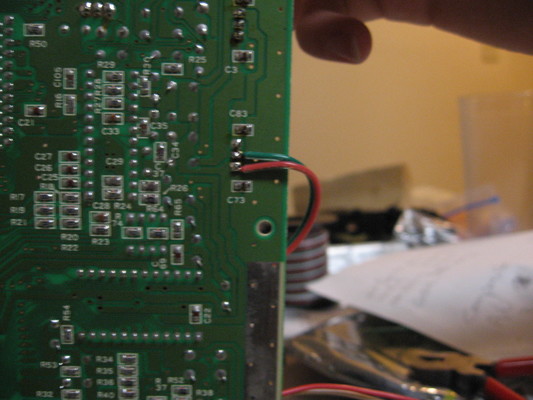 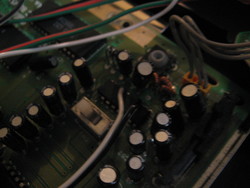 The amazing YM2612 FM synthesizer must be heard in stereo. The Model 1 Mega Drive’s A/V port only features monaural audio. I tapped pins 11 and 14 of the CXA1034 to get amplified stereo audio, the same found at the headphones port. Unfortunately, this connection is subject to the volume slider and tends to hum. It’s possible to disconnect the built-in amplifier (an LM385) and build a stereo version of the same thing, but doing that would remove the monaural audio on the A/V connector and break compatibility with the Super 32X. Check out this schematic for more information. Non-amplified left and right audio is available from CXA1034 pins 1 and 8.

Position the top half of the case in front of the mainboard like it was hinged open, and connect the S-Video mini-DIN and the three RCA jacks to their source points on your project board using plenty of wire. This way we can easily open the console in the future without struggling with short wires attaching the top of the case to the bottom. 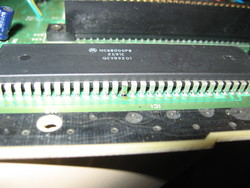 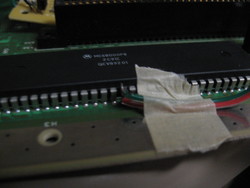 Use a solder braid to remove solder from pin 15 of the MC68000, then gently pry it up and off the board with a blade. Be careful not to break it! Attach a wire to the bent up leg, and connect this wire to the common terminal of your clock selection switch. Solder a wire to the original hole to get the stock 7.67 MHz clock. Connect your oscillator to power and ground, then connect its output terminal to the other side of the clock switch.

Some games and add-on hardware like the 32X don’t support the faster clock, so installing the switch is not optional.

Find the block of mainboard points labeled JP1 through JP4. These control the console region. JP1 is Japanese language, JP2 is English language, JP3 is PAL, and JP4 is NTSC. The JP1/JP2 and JP3/JP4 pairs share a common side (Find it with your continuity meter!). My American console, then, comes with JP2 and JP4 connected. I don’t have any PAL games, so this guide focuses only on JP1 and JP2. 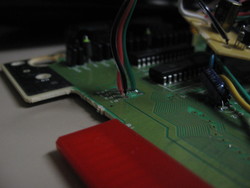 This mod can be done with a SPST and two wires, because disconnected points are pulled high. That means once the stock JP1/JP2 trace is severed connecting ground to a JP1/JP2 common point will make the system Japanese, and disconnecting that ground will make it English. I did it with three wires and a SPDT so I could use matching switches for this and the overclock. 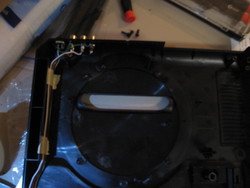 Grab the top half of the case and round out the High Grade Multipurpose Use AV Intelligent Terminal to accommodate the larger, rounder Japanese cartridges. I used a Dremel, but pliers and sandpaper will get the job done. 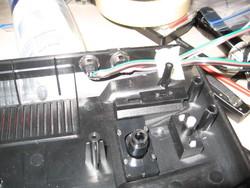 Wire the two switches with plenty of slack, just like the audio and video connectors.

There may be a capacitor between the JP1 points. Removing it won’t hurt anything, and it’s probably the culprit if your region mod doesn’t work properly. 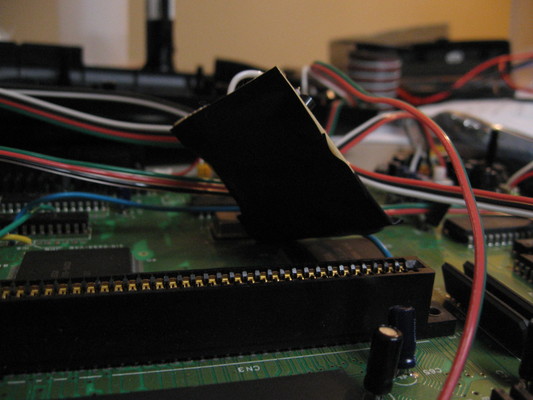 Tape over the underside of your project board to prevent short-circuits if it touches something on the mainboard. Then, carefully re-assemble the console. The only difficult part will be running the jack and switch wires out around the thin RF shield, although you can just leave the shield off if you don’t want to deal with it. I used a little tape on the wires to prevent the sharp edges of the shield from gouging the wires.

Fire up some games! Check out some S-Video! Beautiful, isn’t it? 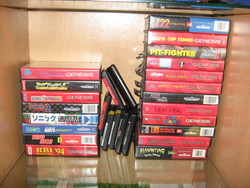 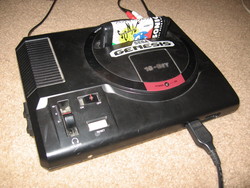 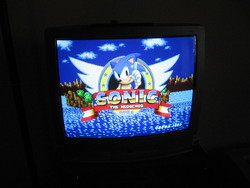 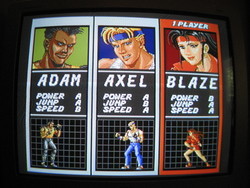 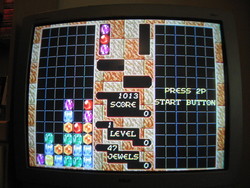 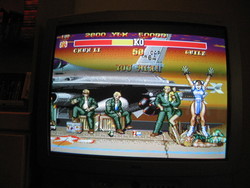 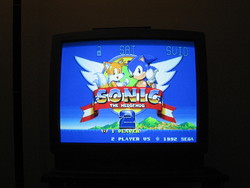 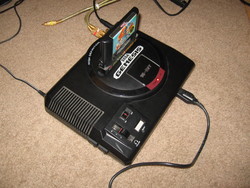 Older releases aren’t picky about the region of your console, but if you play newer titles you might run into a big angry (humourous, in some cases) scare screen if the region switch is in the wrong position. Some games also don’t take to overclocking very well. NBA Jam bailed to a crash handler when I tried to play it at 10mhz. 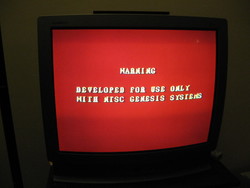 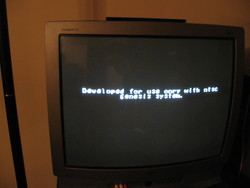 Enjoy! Double-check all the connections if things don’t work as expected, especially the clock connections.