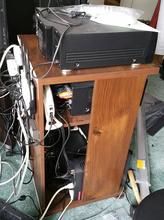 Life lesson learned: never bring a cabinet to do a rack’s job. My audio cabinet collapsed, dumping the CLD-D703 down on to the upright Syberpower UPS and the Node 304 holding my router/firewall PC. I tried a few times to repair it but soon realized it was done. Time to move on.

The old setup was pretty basic, just a wooden shelf with all the wall-mountable bits (cheap gigabit switch, cable modem, power strip, and OpenWRT box) screwed to the back and AV gear on the shelves in front. The NAS sat nearby in a Define Mini tower case. It was a mess.

Furniture should last longer than a year, so I ditched the wood shelf for a rolling 12U metal rack, the upright UPS for an equivalent 1U model, and the two PC cases for a 1U (router) and 2U (NAS) case. None of my AV equipment is rack mountable, and I didn’t want to have to replace any of them (good luck finding a rackable LaserDisc player you’d actually want to use), so two rack shelves took care of them. 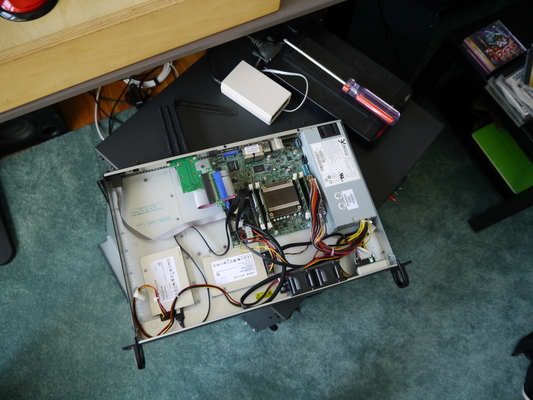 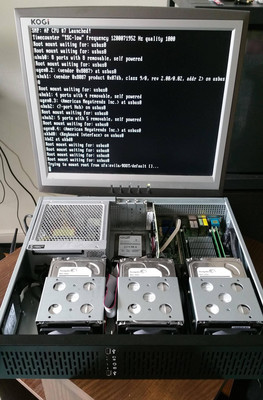 The router and NAS fit in their new cases because they were just rebuilt a few months ago with smaller, more efficient, and — most importantly — ECC-supporting Avoton boards. I’ll post about those later since Avoton is amazing. I was able to ditch the OpenWRT access point entirely in favor of an Atheros 802.11a/b/g/n card running in hostap mode on the router. The whole thing is vastly more dense than the old cabinet and let me rearrange the room by sticking the rack under my standing gaming desk instead of in the corner behind the 29” PVM.

I bundled the cables attaching the rack to the wall, leaving plenty of slack so I can wheel the entire out from under the table to work on it while things are still running. Instead of pulling ethernet cables through the bowels of the rack I picked up a feed-through Cat6 patch panel and a bag of 2” patch cables. Every port on the switch is wired to the corresponding port on the back of the rack for easy disconnect. The whole thing came together beautifully and fits exactly as planned under the standing desk beside the gaming PC’s subwoofer. (Yes, HDDs next to thumping bass; what could go wrong??)

There are a few improvements I’d still like to make, especially replacing the tiny stubby WiFi antennas for some omnidirectional ones I can mount up on the wall, but it’s already a massive improvement over what I had. I will never be able to go back from buying rack gear. 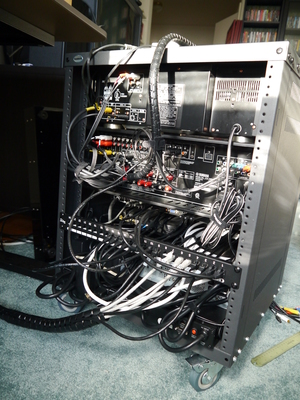 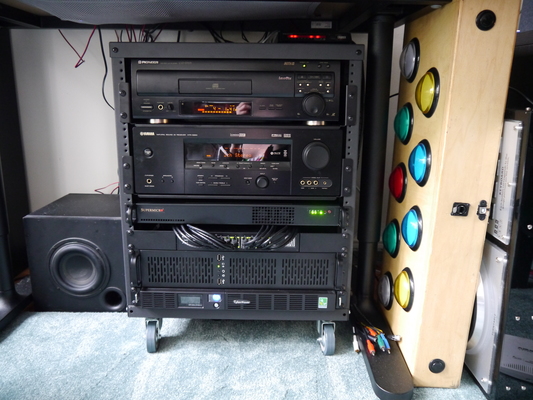