At the time, I’d worn out my RedOctane Ignition 3.0 pad, saved up for about a year, and splurged on a Cobalt Flux. Amazing as the new pad was, the stock control box was Playstation-only, and I wanted to play on Xbox (Homebrew and Ultramix) and on PC. Luckily, I still had the RedOctane pad. Its control box supported Playstation, Xbox, and USB, so I salvaged it and adapted it to the Cobalt Flux. 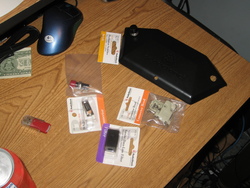 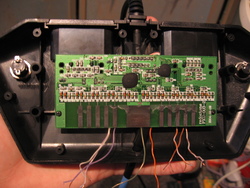 The control box and soft pad came apart easily, but there were no labels visible on the controller board or the FFC that connected it to the pad. Tracing the pad wiring granted me a pinout. The FFC contacts were coated in a conductive graphite. Scraping it off revealed the copper base, perfect to take solder. Holes for the Back and Start buttons and for the pad lead needed to be drilled in the RO control box housing.

Pinouts for the Cobalt Flux’s DE-15 are easy to come by. 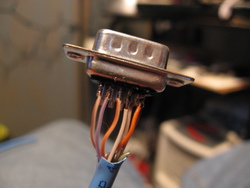 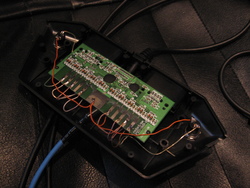 All nine panels of the Cobalt Flux register presses, and with ground it requires ten connections to its DE-15. The RedOctane pad’s middle panel does not, so its control box is missing that connector. With Pump It Up support thus out of the question, I used Category 5 cable and wired the four cardinal directions as well as the front two diagonals, using seven of the eight wires. This configuration is suitable for DDR Single mode and DDR Solo mode. 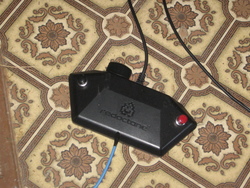 Once closed up, the RO control box plugs right into the Cobalt Flux pad lead, just like the stock control box. I tested it on PS2, Xbox (Ultramix), Xbox (Stepmania), and PC (Stepmania).