Rhapsody in Blue and White

My name is Nicole, and I have a confession. Before Silicon Valley, Facebook, FreeBSD, or college, I was a Macintosh fangirl. My first computing experience was a Macintosh LCIII in ‘94. Later, a Power Macintosh 7100/66 became the first computer purchased with my own money. I upgraded several times over the years to a 7300/200, an 8600/200, and finally to a portable, my “Pismo” Powerbook G3 in 2003. 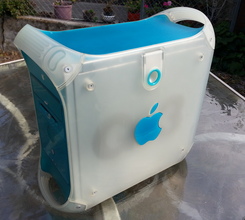 Apple fell out of favor with me as their focus went to mobile and their desktop platform to Intel. Erica and I use our Pismos frequently, hers in the loaded 500mhz G3 configuration and mine with a 550mhz G4, but laptops are not very useful for file storage or running server software. The iCEO era of Apple history remains my favourite, and that’s why a dusty computer tower so easily grabbed my attention a few months ago at Community Thrift. I walked out sixteen dollars poorer with a Power Macintosh G3 Blue & White. The Blue & White, christened Michiru due to its resemblance to the best Sailor Senshi, quickly became our zen garden computer and home for my classic Macintosh software hoard.1

The Blue & White has long been one of my favourite computer case designs. It wasn’t even availble for a year before the G4 towers rolled out in boring “Graphite” grey, and the era, if you could call it that, of pretty professional Mac workstations was over. 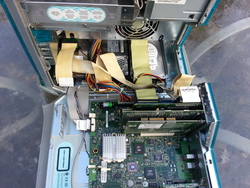 The tower looked like it was recycled straight off someone’s desk with files and decade of dust intact. We took the air compressor to it, nearly choking in the dust cloud. 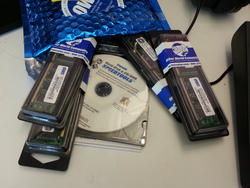 I tossed in some spare parts from my junk drawer, including a NAND-swapped firmware-flashed 64MB Radeon 7000, an Apple OEM Zip 250 pulled from a G4, and my spare region-flashed Pioneer DVR-109. I turned to eBay for a handful of niceties like the blue Zip drive bezel and to OWC for the full gigabyte of RAM.

A trip to Thrift Town a block over netted me the matching 17” Blue Apple Studio Display I’d spotted and had no use for some weeks earlier, and an M0312 Apple Extended Keyboard II showed up a few weeks later for $3.

The internal ATA controller in the revision 2 won’t freeze or corrupt your data like the first revision’s, but it’s still limited to 128GB or smaller disks unless used with a special driver like the one found in Hard Disk SpeedTools, so I picked up an Acard AEC-6280M UltraATA 133 controller to host my spare 500GB drive. It uses the same chipset as many more expensive controllers from Sonnet and other Mac product vendors and is bootable.

I partitioned the 500GB disk into two 50GiB partitions for Classic OSs, a single 75GiB partition for Mac OS X, and the rest (~300GiB) for shared storage. The two 9GB LVD drives are for Rhapsody and Blue Box, respectively.

The B&W G3 was the primary target machine for Rhapsody, released in boxed product form as Mac OS X Server 1.0 alongside the Power Mac itself in 1999, and I just happen to own a copy complete with mislabeled “1.1” OS install disk, developer tools, third-party solutions software disc, and WebObjects 4.0 with developer license.

This now largely-forgotten OS is the evolutionary link between NeXTstep and the modern Mac OS X. After wasting years on Taligent and Copland, Apple struggled for relevance, mindshare, and customers by 1996. Beating out Gassée’s Be, NeXT Software, Inc. aquired Apple Computer, Inc. for -$400,000,000 and returned Jobs to the company. In 1997, the Rhapsody strategy was announced, and developer previews were soon distributed of what was basically OPENSTEP/Mach 5.0 wearing a Macintosh Platinum skin over the traditional NeXT-like Display Postscript. 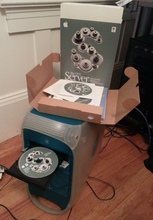 This new Mac OS relegated classic Macintosh programs to virtualization in the Blue Box, the direct ancestor of the Classic Environment found in OS X releases until Tiger, and the NeXT OpenStep APIs were promoted heavily as the way of the future. Mac application developers collectively balked at Apple’s suggestion of a full rewrite of their products for Rhapsody, so it’s understandable why the few third-party software packages for Rhapsody and Mac OS X Server 1.x were from old NeXT development houses like The Omni Group and Stone Design Corporation.

To solve this, the classic Macintosh APIs were modernized and ported to Rhapsody as Carbon, shown off as early as WWDC 1998 as the future of the platform transition. This left Rhapsody’s public release stillborn in 1999 despite new features such as Quicktime Streaming Server, NetBoot, and WebObjects 4.0, the first release of NeXT’s web application framework to run on Mac OS. It was quietly replaced when Mac OS X eventually shipped in 2001 with Cocoa, Aqua, and Quartz, and the world moved on. 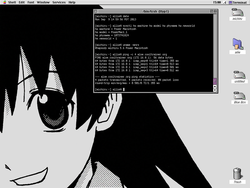 I find Mac OS X 10.x distasteful in several ways, including the paradigm-overloaded Dock, case-aware-but-insensitive2 HFS, constant beachballs, the dreadful Finder, and iOS-like UI trends in the modern versions. Rhapsody is my ideal Macintosh OS blending the old NeXT world with a UI I love. While limited in software availability, Rhapsody is much faster than Mac OS X on the same hardware, especially when comparing UI performance even after the advent of Quartz Extreme. We use Mac OS X Server 1.2 on Michiru for a Mac OS with a nice GUI, solid Unix-like base, and as a host for truly multi-user Mac OS 8.6 in Blue Box. The virtualized copies of Mac OS are stored as disk images under each users’ home directory on an Apple_Rhapsody_UFS partition, and the applications are shared on one of our 9GB LVD drives.

Mac OS 9.2.2 and Mac OS X Tiger reside on separate partitions on the UltraATA drive. I like to spend time in all three OSs for different uses.

I promised myself the Pismo was all the classic Mac I needed, but here I am with a beastly G3 workstation. Michiru will get a desk of her own soon. Until then she sits beside my modern FreeBSD desktop ready for a long Hotline download or for one of the classic Mac games3 in our collection. 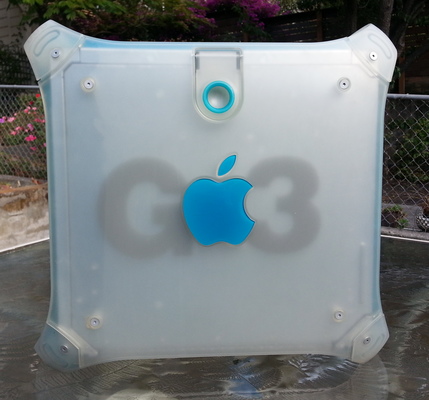