We have a new motorized Ku-band satellite antenna! It’s been five years since I left my old cobbled-together FTA satellite setup behind along with the rest of my home town, and we’re finally able to replace it thanks to the great southern view from our new apartment. 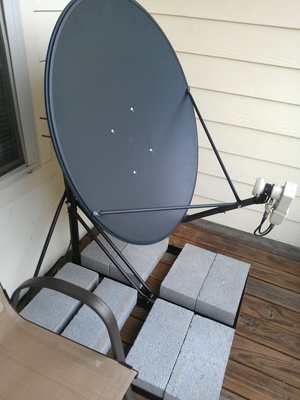 Our reflector — the “dish” part of a satellite antenna — is a GEOSATpro 90cm, nearly the largest one can use while still enjoying the protections of C.F.R. Title 47 Section 1.4000, one positive part of the US Telecommunications Act of 1996 prohibiting leasers and landlords from imposing restrictions on residents installing a one-meter or smaller antenna. 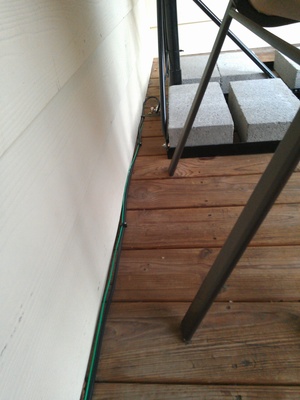 Space is a premium on my small south-facing porch, so a single motorized antenna is a must. I snagged a previously-owned but unused Digipower SG2100 on eBay for half MSRP. The motor bolts to a non-penetrating mount secured with cinder blocks, to avoid trashing my deck, and the whole thing is grounded to the house ground via an outdoor outlet. 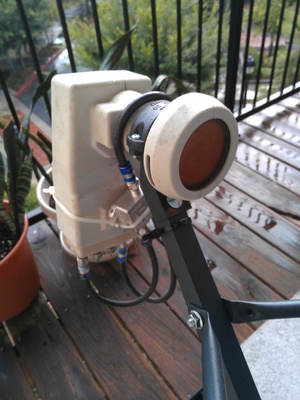 The LNBF is an Invacom QPH-031 I previously paired with an ex-Primestar 1.2 meter Channel Master reflector. It works wonderfully with the smaller 90cm reflector and offers both circular and linear Ku through the single feedhorn. I leave the circular side connected and accessible via 22 khz tone switch, but there isn’t any unencrypted circular KU programming over North America in 2012 to my knowledge.

I originally considered a USB DVB tuner for use with XBMC-DVR on our HTPC, but the GEOSATpro microHD blows any of those away feature-wise. It supports DVB-S2, HDMI, USALS, modulations like 8PSK and 16APSK, firmware updates via satellite, electronic program guide, and simultanous recording of two channels.

We’re tracking the 74°W–105°W arc well, but the signal quality drops off west of 105°. I’ve pulled in 148°W on a 46cm reflector from this longitude in the past, so Galaxy 18 and AMC 21 should come in barring line-of-sight issues. We’ll have to keep experimenting and tweaking the motor alignment in search of AMC 21’s HD PBS feeds.