Beat Machine pt. 4 - listen to yourself

Take a look at any new BEMANI cabinet hardware like SDVX or MUSECA. They come with headphone ports, because arcades are often crowded and noisy. With IIDX on the other hand the best you can do is turn on the “Echo 4” effect and hope you can hear enough to keep a beat. A headphone amplifier is a very popular mod for both public and private IIDX machines, and my machine is no different! 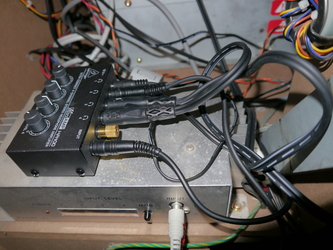 Four-port amps such as the Behringer HA400 are very popular for this purpose. Some operators mount the ampliflier in a discreet place then run 3.5mm extension cables to another spot, but they usually end up below the control deck and I hate having to squat to plug or unplug them. Some operators just mount the amp by itself and expect you to plug into it, but it usually ends up on one side (usually 1P) where it will inconvenience players of the other.

I decided to mount the HA400 inside the cabinet as a distribution ampliflier to the machine’s amp and to two external standalone headphone amps. I keep the cabinet’s amp set to a safe low level and use the HA400 knob to adjust speaker volume so there’s no chance they could blow out. I wanted to put the player’s headphone jack and volume knob somewhere accessible and settled on the tops of the card readers. Two SHINA K8 amplifiers match the styling of the IIDX card readers perfectly with their silver faceplate and black body. Like for the card readers themselves I pulled off the metal trim and wood cabinet sides so the wires could be kept in a neat bundle.

That took care of sound output, but what about sound input? I have the secondary DVI output of my IIDX PC plugged into an XCAPTURE-1 and stream myself playing IIDX a few times a week. My stream included the game audio but I wanted to be able to include the sound of my key taps too. Using the microphone in my hand camera would be easy, but that would require me to always mute the cabinet speakers and use headphones to avoid an echo from the game audio. I also didn’t like the idea of the mic picking up background conversations in the room. I knew a piezo microphone would pick up sound traveling through solid objects, so I decided to buy a guitar pickup and guitar pre-amp, install them into the IIDX control deck, then just plug the ¼” TRS output into my stream PC’s microphone input. It only provides a mono audio signal, but everything was perfect after selecting the “Downmix to Mono” option for that source in OBS Studio!