This isn’t a post I thought I’d ever have to write, but I dismantled my beatmania IIDX setup, sold off most of the pieces, and canceled my INFINITAS subscription. I’m done.

…because I got the chance to buy an actual IIDX arcade machine! A listing turned up in January for a IIDX cabinet from a private seller in southern California. I sent the listing around to some friends, but none of them seemed interested. A month later I finally decided to make an offer of my own. I was hesitant at first because playing on an actual machine doesn’t make you a good player. I’m okay at the game but not amazing, and somewhere in the back of my mind it felt like an inappropriate luxury for a 7th dan player like myself. What finally convinced me was the realization that I’ll probably never see one of these for sale again so close to home for such a low price. Also alcohol may have been involved. Never drink, kids, because you’ll impulse buy an arcade machine and then have to go to Los Angeles to pick it up. Many of the domestic arcades that haven’t gone out of business over the last decade have sold their machines off following the death of Programmed World, and before long they’ll all be with private owners who will probably never sell them. The alternative to buying locally is importing one from Japan for four times what I paid and dealing with containers and customs. Some of my friends have done that and no thank you.

Erica and I flew to LAX after MAGFest 2016. It was my first ever trip to LA, and everything I was warned about was true! Our plane had everyone from lanky Anthony Keidis wannabes with too many bracelets to 15 year old girls talking about their reality TV auditions. Traffic at 3PM on a Monday was worse than the very worst Bay Area traffic I’ve ever been in, and it was hot. I was dressed for Washington DC and sweating buckets. At least we got to visit the home base of Round 1 USA in Puente Hills Mall and hang out with some of my friends who play there. R1 likes to play favorites, and PHM has cheaper games (4 credits per play instead of 6), four SDVX cabinets instead of one or two at other locations, unique games like Neon FM, and is where all the location tests happen like DDR 2015 and Tsum Tsum last year.

I couldn’t find any company willing to rent me a panel van or a lift-back truck one way from LA to SF, so I had to make do with a 12’ truck with a loading ramp. Not ideal since 12 feet is way more than I needed and since it would require a lot of disassembly. A lift-back truck would just let me roll the IIDX cabinet on, secure it, and roll it off on the other end. It needed to be disassembled anyway to make it up the stairs into my apartment so whatever. The top speaker/light box comes off with four big bolts, then the metal sides can be removed. The control deck comes off with four more bolts, and the monitor can be removed. That’s all the disassembly you can do without doing some surgery. The side speakers boxes and effector box are both nailed on but can be removed if you’re careful. Someone had already ripped this effector box off the staples in the past, so I just wrapped it up separately. The base of the cabinet is the only part that’s actually challenging to move since it weighs something like 150kg. We managed to move it with three people but I’d definitely recommend having more. 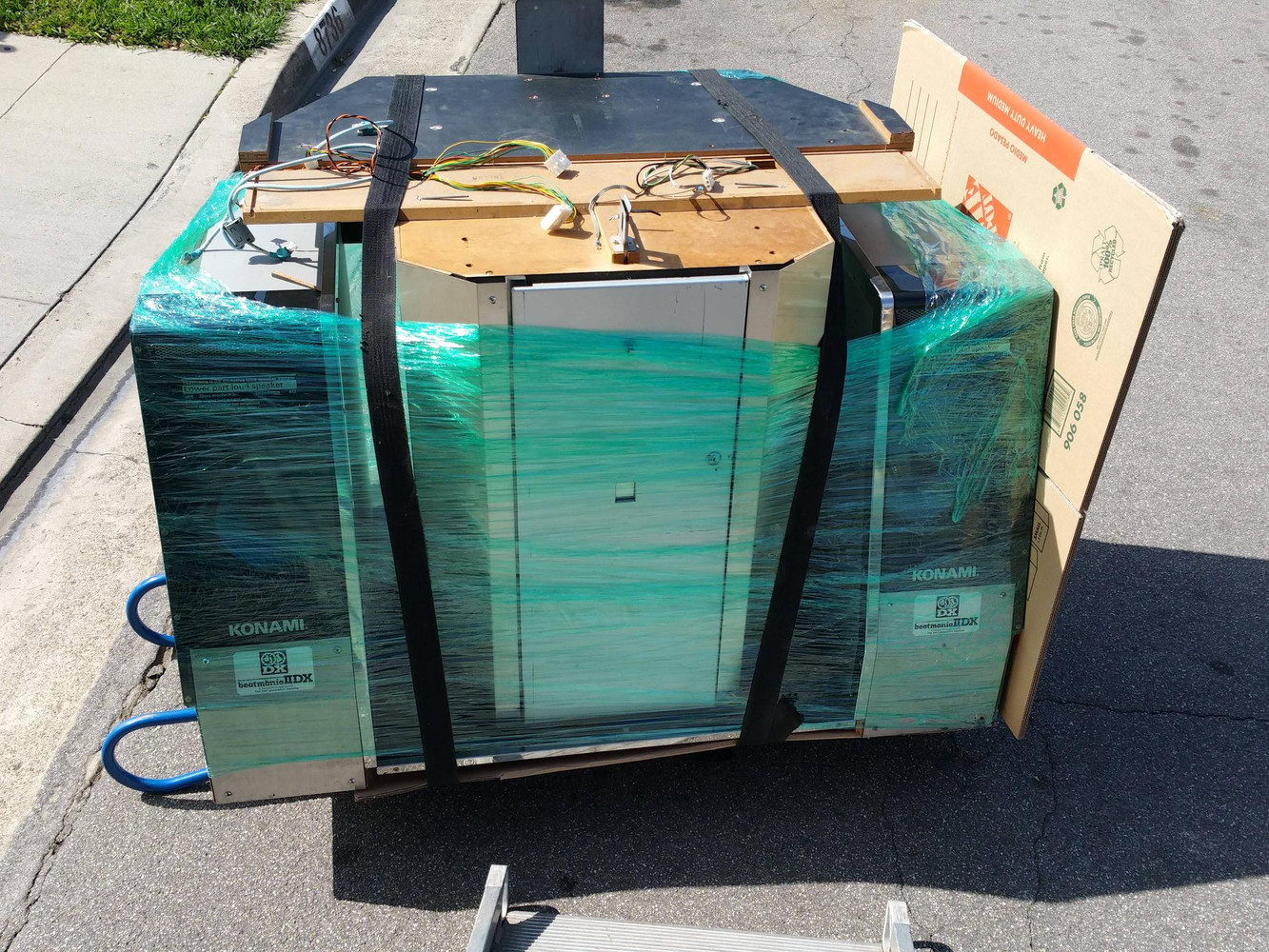 After it was loaded and safely strapped in we started the ten hour drive north up Interstate 5. The drive itself was uneventful but very scenic, especially during the Santa Susana Mountains crossing. By myself wouldn’t have been very enjoyable, but with a parnter, snacks, and lots of good music it was a fun little adventure. That was the longest I’ve ever driven in one stretch as well as the largest thing I’ve driven since leaving the farm where I grew up. It was my first time seeing the giant stretch of farmland in the middle of California. It’s easy to forget the state isn’t all sprawling office buildings and tiny houses that sell for a million dollars. We got back to San Francisco around 22:00, unloaded, and hefted all the parts up to my second-floor apartment. The base of the cabinet almost didn’t make it since the dolly I was using was overloaded and since the stairs have pretty deep lips that were hard to climb. Once all the pieces were there I took the truck back and immediately went home and crashed. I had work the next day so my apartment just had to stay a mess until that weekend when I could start the reassembly.

The first thing I laid down was some soundproofing material. My downstairs neighbor complained in the past about the key tap sound coming through the floor late at night, so I bought a roll of recycled rubber matting and a roll of PVC matting, both meant for exercise equipment. The rubber provides more absorption, but the PVC is more comfortable to stand on. I trimmed two sides of the rubber with a utility knife to make it a few inches smaller than the PVC and to provide material for layers in the back to make it level with the rug. The PVC only needed a single cut to trim 18 inches of length, then it unrolled over the rubber with a nice taper on the three exposed sides. The base of the machine has casters but is still extremely heavy, and it kept bunching the soundproofing up when trying to wheel it on top. Once it was in place I was able to reassemble starting with the effector panel, control deck, metal speaker supports, speaker/light box, and finally the decorative front arch and side speakers.

Some parts of the machine were in rougher condition than they appeared in photos. There were lots of missing screws and quite a few rusty areas on the chrome sides and arch. The monitor it came with was a Panasonic 32” TV, completely the wrong size. Luckily I already had a great monitor of the correct size, my UN39FH5000. It’s not the official Konami monitor but I don’t care. When I got it the effector box had been ripped off the staples, probably when someone wanted to service it. That’s securely reattached now so pressing start no longer makes the whole unit rock backwards. The previous owner told me that as far as he knew the 14 keys were the originals that came in the machine in 1999, and I don’t doubt him because they were all in awful condition. 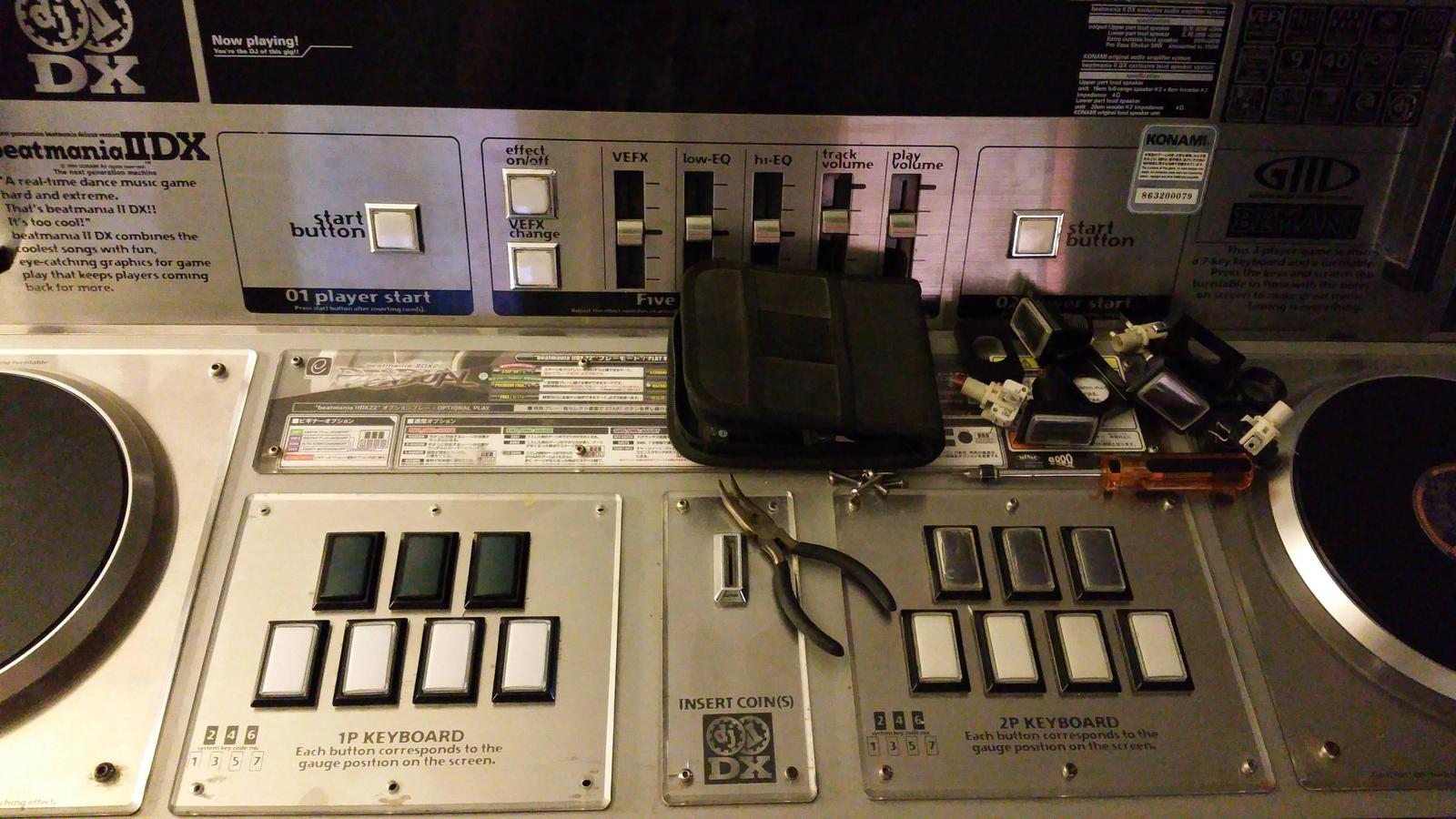 Most of the keys had cracks in the plastic and all of them were in poor cosmetic condition. The 1P and 2P sides had mismatched switches, and 1P was for stamina masters only with 200g levered switches and what felt like 100g springs. I just removed them all and tossed them aside in favor of the Sanwa keys, 50g Omron switches, and 60g springs from my existing pair of IIDX controllers. While I was digging around in the control deck I replaced the fluorescent tubes lighting the two turntables and tinted them a cute pink by wrapping them in tubes of translucent plastic. All the key lights are still missing since I need 12v lamps and the ones in my controller are only for 5v. Ask me how I found that out. 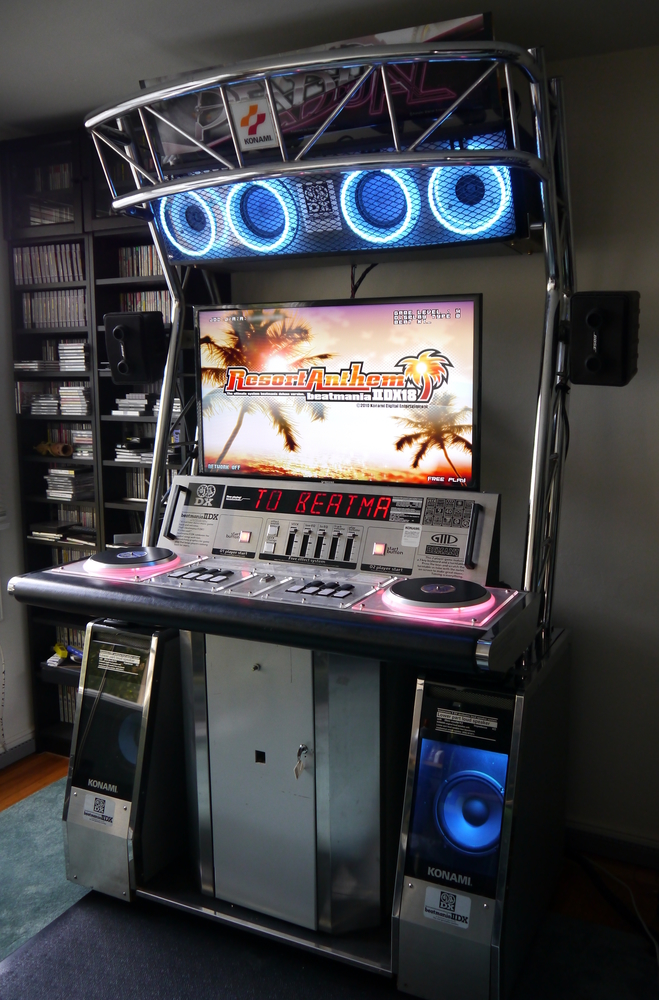 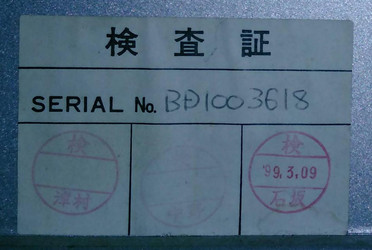 According to the sticker inside the door, my machine was manufactured on March 9th 1999, barely weeks after the release of the very first IIDX style. It’s a relic! It has the pre-2003 Konami logo on the front, a 5th Style turntable decal on the 2P side, and a Twinkle inside that until recently was still used to power the C02 USB IO board and the audio effector panel. I’m not sure when they switched from the Konami logo on the front to the “dj II DX” badge on new cabinets, but the 9th Style conversion manual shows the kit includes the new decal to be applied to older units. Luckily mine is untouched. According to the coin counter this machine has taken 69764 credits.

The thing that attracted me to this particular machine was the great condition of all the painted decals on the metal effector panel. Almost any machine kept in public will get this rubbed off by passersby and by players slamming their palms on the start buttons to adjust their green numbers during BPM changes. I do own the bass platform but keep it in storage because I hate them. The best perk of IIDX machine ownership is being able to play one without powerstancing across that thing. There’s still a bunch of work to do to get it to 110%, but after swapping the keys and monitor the machine is very playable and I can go back to working my way through the level 10 folder while I wait on a batch of parts.