It’s time for my unpopular opinion of the day: Xbox is the best sixth-generation game console. Few people seem to care about it these days, but it’s basically Dreamcast 2, home to all the last post-Dreamcast pre-Sammy iterations of SEGA series like Panzer Dragoon, Jet Set Radio Future, Gunvalkyrie, House of the Dead, Otogi, Outrun, Crazy Taxi, Sega GT, and Shenmue. Xbox has better third-party support than Dreamcast and Gamecube and better specs than PS2, roughly equivalent to a 733mhz Pentium 3 / GeForce 3 gaming PC of the era except much easier to maintain. All Xboxes have an internal 8GB ATA hard drive for game saves, custom soundtracks, and DLC. On a hacked Xbox console it’s possible to upgrade the drive to any size within the limit of the 32-bit MBR, up to 2TB, leaving room for ripped game discs, digital media, emulators and ROMs, and homebrew like StepmaniaX. Parallel ATA drives like the one used in the Xbox aren’t widely available these days, so I used a WD Green SATA drive and this adapter.

If you want an upgraded hard drive you need a modded Xbox, preferrably a hard mod. Softmods will work, but the font exploit they use happens late in the boot process when the Dashboard loads. The Ndure softmod is available as a save game for three exploitable games. It modifies unsigned font files used in the system Dashboard that exploit a buffer overflow to allow execution of unsigned code. Since BIOS is unmodified you will still be required to lock your new hard drive with your system’s unique key and will be limited in the partition layouts you can choose. Softmod users need to use NKPatcher to enable LBA48 support for large drives, or the space beyond 137GB will be unusable. Now that Xbox LIVE is totally dead and LIVE-safety no longer matters there is no reason to prefer a softmod. They’re nice if you’re averse to opening the console but if you’re willing to put a new hard drive in it that’s pretty much moot.

A modchip or TSOP mod will remove signature checks and support LBA48 directly by running a modified BIOS like Xecuter 2 5035. This type of mod lets you drop any unlocked hard drive you want into the system, boot Auto Installer Deluxe, partition and format as you please, install a fresh MSDash 5960 and a homebrew dashboard, and FTP all your saves back over. My system has a 1.0 motherboard which, along with the 1.1, shipped the 256k retail BIOS on a full 1MB TSOP meant to hold the larger devkit BIOS. I was able to solder in two places to re-enable the TSOP write pins then just burned the larger 512k modchip firmware straight to the board to achieve the same effect as a modchip but with no additional hardware. Version 1.2 and later systems will need a physical modchip to hold the larger BIOS since the TSOP was downsized to 256k and later removed completely with the 1.6. Xbox modchips sit on the LPC bus usually used to program the system at the factory and use the point ‘D0’ to disable and override the motherboard BIOS with the hacked version stored on the chip.

The disk partitioning program is called XBpartitioner, and the version linked in this thread should be used instead of the one bundled with Auto Installer Deluxe, because that version has a bug causing it to freeze on partitions over 999GB. The stock partition layout is a small C:\ partition containing the Microsoft Dashboard, a 4.8GiB E:\ partition containing game saves, custom soundtracks (WMAs), and installed DLC like Halo maps and DDR Universe songs, and X:\, Y:\, and Z:\ cache partitions used by games as temporary storage. I left C:\ and the cache partitions alone, edited the offset of the first extended partition on my system to grow E:\ to 120GiB, and made two new large extended partitions to hold everything else. I split the extended partition space into a 810GiB F:\ and a 927GiB G:\, both with 64k blocks. You can make one giant partition, but I’ve read reports of corruption over 1TiB and didn’t want to risk it. Softmod users can’t extend E:\, but I wanted lots of room for custom roundtracks.

There is a homebrew program called DVD2XBOX available in AID that will rip any game to your giant new extended partitions. Almost all games will work perfectly from HDD. Several of them have space-wasting game demos and videos that can be deleted, and a very handful of games (two in my libray) require patched executables to work. The ripping speed is constrained by the slow DVD drive and ATA33 controller, and ripping my entire library took just over five days while ripping in our spare time. I used a 250GB drive previously and filled it up easily, but the 2TB hasn’t even hit half full yet and looks like it should last a while. My Dashboard is XBMC4XBOX 3.5 with the black JX720 theme. I think the blades interface in XBMC ends up suiting the OG Xbox more than 360 :) 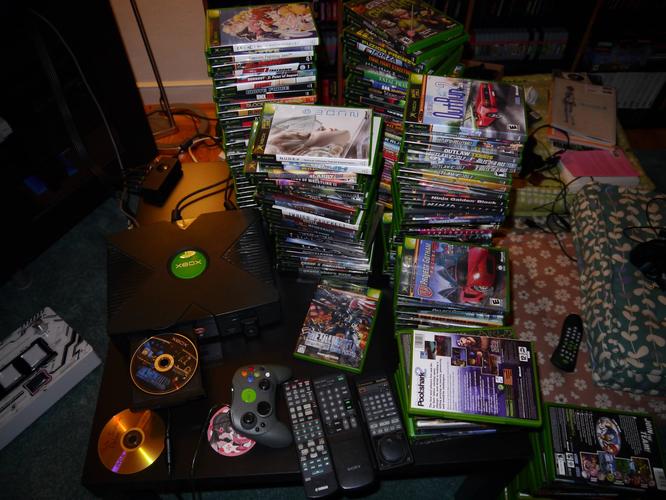 While you’re inside the system it’s a good idea to swap the 40 wire ATA cable for an 80 wire one to reduce cross-talk. Also, everyone should remove the guaranteed-to-burst-and-leak clock capacitor unless they have a 2004-era 1.6 motherboard that won’t boot without one. Once you’re all done you can button it back up and enjoy the unlocked potential of the big black beast. It doesn’t cope well with h.284 or large resolution video, and the Wii has a better emulation scene, but Xbox with XBMC and the remote control kit makes the best DVD player and has a game library that can’t be beaten by anything else of its era.